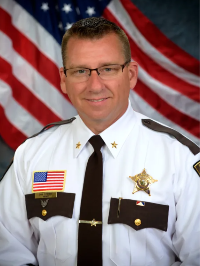 Sheriff Starry is a graduate from St. Mary’s University and is a graduate of the 250th session of the FBI National Academy and the FBI Law Enforcement Executive Development Association program.

Sheriff Starry proudly serves on the Board of Directors and President for the United Way of Washington County East, the Executive Board and Chair for the North Central High Intensity Drug Trafficking Areas, the Executive Board for Lakes Center for Youth and Family, and Executive Board for the Frontline Foundation.  He serves on the leadership committee for Toward Zero Deaths (TZD), and is a member of the Minnesota Violent Crime Coordinating Council.  He is a member of the National Sheriff’s Association, National Association of Chiefs of Police, International Association of Chiefs of Police, American Jail Association, and past President of the 4th district of the Minnesota Sheriff’s Association.

Dan and his wife, Jeanice, have been married for 29 years. They live and work in Stillwater with their two daughters. Dan lives by the motto “Do the right thing” and has demonstrated this through his career at Washington County through engagement with the community where he continues to build strong relationships with community partners for the benefit of the citizens he proudly serves.

Chief Deputy Anschutz started his law enforcement career in 1987 as a military police officer in the United States Marine Corps. While in the Marine Corps, he served as a member of the security team which protected Marine One, the aircraft which carries the President of the United States. Doug joined the Washington County Sheriff's Office in 1996 and has served as Patrol Deputy, K9 handler, DARE instructor, Patrol Sergeant, Commander, and Chief Deputy.