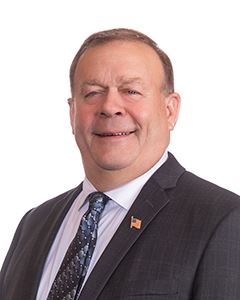 Vice Chair of the Washington County Board

Commissioner Stan Karwoski was reelected in 2022 and 2018, and first elected to the County Board in a special election in November 2016 to serve District 2.

Commissioner Karwoski was serving his fourth term on the Oakdale City Council when he was elected mayor in 2014.

Commissioner Karwoski is active in many civic organizations such as the Oakdale, Woodbury, and St. Paul Chambers, and the St. Paul Winter Carnival. He is past president and former member of the (independent school district) 622 Education Foundation. He is past chairman and former member of the Washington County Park and Open Space Commission. He has served with the Yellow Ribbon Network. Also, he served on the city of Oakdale’s planning and park commissions. Additionally, he has volunteered as a student reading mentor and a robotics mentor.

Commissioner Karwoski, a native of St. Paul, has lived in Oakdale since 1987. He is a graduate of Harding High School. He also earned a vocational school Design Degree and a Bachelor’s Degree in Business Administration from Metropolitan State University. Commissioner Karworski is married, and has four adult children, and five grandchildren. He is a retired 38-year employee of Graco, Inc., where he was a principal designer. He holds nine invention patents.